I have a quick update on Diago, for all of you that where wondering/ worried about him. He had his vet appointment on Friday, and everything went as planned. He did really well, and according to our vet, he even behaved for them lol. Up until about an hour or so before we came and got him, at which point he started getting louder and louder, he was simply ready to be out of the kennel and back at home lol. Well even though I said everything went as planned, there was one "little" mishap that happened. At some point while he was in the kennel, he started chewing on the metal door and as obsessive as he gets about things like that, he didn't stop chewing the door until he broke off his bottom right K9 tooth! It's not completely gone, it broke off about 3/4 of the way though, so now he looks quite a bit uneven when he smiles ;) The vet told us, he shouldn't have a problem with the broken tooth, but to keep an eye on it. If he stops eating or starts acting strange, they told us to bring him back and they will do something about it.
So, aside from the tooth issue, since we've brought him home everything has been good so far. We of course haven't let him around Titus, but on a bright note, he also hasn't tried searching him out, which has been one of his habits for the past month or so. On Saturday, the day after, he was pretty much right back to his usual self. He hasn't acted like he's been in any pain, or anything else unusual. We're pretty hopeful about getting him fixed, and do hope it'll make a difference.
Oh, before I forget, our vet did remark on his stubbornness, aside from the broken tooth, it also took them a little over an hour, before the anesthetic finally kicked in with him. They said, so far, he's been the first dog, that they've seen that literally fought falling asleep for that long lol. Every time they thought he was about to go out, he'd pop his head right back up and look at everyone, all wide eyed.
That's it for now lol. Wish us luck with his attitude problem lol, I'm really hopeful that this will work ;)
Posted by prplrush at 10:54 PM
Update on Diago
2009-11-22T22:54:00-06:00
prplrush
Comments

Don't yell at me!! Please?!? Lol, here I go again, yes I took a very long hiatus from blogging for well i can't really say a few days, since it's bordering on a month lol. But I just needed a breather for a moment.
So here's a little update on my past month ;)

Billy started his new job on Monday and we're really excited about it and being that he's on night shift, this is perfect for me. I'm much more of a night owl then an early bird any day lol. So I'm sure you all will be getting lots of late night posts from me now.

Aside from that, our household has turned into an insane asylum!! Diago has decided that he wants to be dog aggressive now. He's gotten to the point were he wants to challenge our old man Titus on a daily basis now. We can't leave them together in the same room at all, and even when seperating them by rooms with doors, Diago still attempts to tear down doors just to get after him.
We never imagined he would get like this, especially since those two have been best buds, like brothers for the past four years. And it's not like he doesn't have any "upbringing". He knows better than doing it, but it's like he completely shuts everything else out, and goes into a frenzy. I've been doing a lot of reading about the doberman breed and know they can, to a point be preposition ed to dog aggression, and of course knowing that he's an unaltered male, i know that, that plays a huge part in it as well. He hasn't shown any aggression towards Billy or I, nor the other three dogs, it's just him and Titus. Don't worry of course we're working with our vet on what we can possibly do with him, first things first, Friday morning, our lil' mean man is heading to the vets office to get, neutered. The vet already explained to us, that even after that, it can take up to two months before some of the testosterone gets out of his system. And if he still doesn't stop after that, we will have to look into medicating him. I'm almost beginning to think he has a hormonal imbalance that's causing him to act this way, but we will have to wait and see. As of right now, everything is crazy. I can't talk on the phone, do anything on the computer, or anything else that makes him think, even for a second, that I've stopped paying attention to what he's doing. With Diago at 125lbs and Titus bordering on 180lbs the safest thing for now is to simply keep them separated and not give either of them the chance of getting to the other. I've already had people telling me, that I might have to look into finding a home for one of them, but I can't really see myself doing that. We will first exasperate every option available, and cross that bridge when we get there. But finding a home for either of them, really isn't an option. They're a part of the family and that's that.

Ok, enough ranting about the insane asylum lol. Other than those two major things, well, nothing much has been going on. I do have a new giveaway that I will be posting within the next few days hopefully, and I'm sure you all will be looking forward to it!!
As always, comment or email me if you have any questions or anything else that you want me to know about ;)
Posted by prplrush at 6:00 PM
Hiatus and dog aggression
2009-11-17T18:00:00-06:00
prplrush
Comments

Once In a Blue Moon by Eileen Goudge Review

A few weeks ago, I was given the chance to read Eileen Goudge's new book " Once In A Blue Moon". 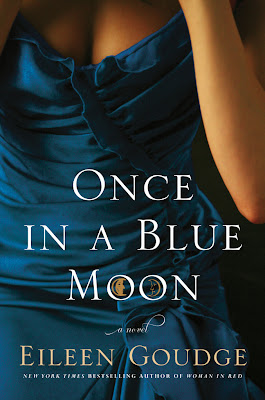 This was my very first read for one of Eileen's books, but she definitely has a long list of loyal fans with some of her previous books, which include; Domestic Affairs, Garden of Lies, The Diary, Thorns of Truth and many many more.
I have to honestly say, when I was first given the book I was a bit apprehensive, because I had it set in my brain that this was a straight up romance book, something I've never really been a big fan of. Why I made that assumption is completely beyond me now lol, because although there's romance in the book, it is so much more. When I first finally picked the book up to start reading it, I found it really hard to put down. And don't never tell anyone lol, but you know if you have a hard time keeping dry eyes throughout the prologue, than you're probably in for a good read. It's not that the book is that sad, it's just really touching. The story line draws you right in, and before long you'll feel like you're part of the book. Without giving too much away here is what the book is about:
Sisters Lindsay and Kerrie Ann have known hardship from an early age. Without guidance from their neglectful mother, their only aid came from an unlikely source, a retired exotic dancer by the name of Miss Honi Love. When the girls’ mother was sent to prison, Miss Honi tried unsuccessfully to save them from being separated and sent into foster care.

Thirty years later, Lindsay is still trying to reconnect with her sister. The owner of a bookstore in the sleepy California seaside town of Blue Moon Bay, she was lucky enough to have been adopted by a loving couple. Unbeknownst to her, Kerrie Ann has suffered a very different life. Bounced from one foster home to the next, she ran away as a teenager before becoming a drug-addicted single mother. Now, newly sober, Kerrie Ann is fighting to regain custody of the little girl who was taken from her.

Neither sister’s expectations are met when they’re finally reunited. But as the two sisters engage in the fiercest battles of their lives, they are at last drawn together despite their differences, restoring belief in the unshakable bond of family.

Hopefully this didn't give too much away for some of you planning on reading this book. I definitely enjoyed this book and found it to be a good read. And want to make sure everyone that's like me, and assumes this is just another romance book, it's not lol! Maybe it was the cover that convinced me of that lol ;)

Disclosure: I was given this book for free to review, this however did not change my opinion about it in any way. What you read here, is nothing more than my own personal and honest thoughts about this book.
Posted by prplrush at 6:17 PM
Once In a Blue Moon by Eileen Goudge Review
2009-10-23T18:17:00-05:00
prplrush
Reviews|
Comments

Our latest winners for the Yoplait Less Sugar, More Fun review and prize pack giveaway are:

Since I already have both of your addresses from the entry, your prize packs will be sent out asap.
For all you that haven't won this time, don't despair, we should get another giveaway up here shortly ;)

prplrush
I love gadgets! Anything electronic and I'm game. I try to get my hands on the newest gadgets big and small as soon as they come out, so that I can give them a trial run sorta speak!

Great Blogs Out there